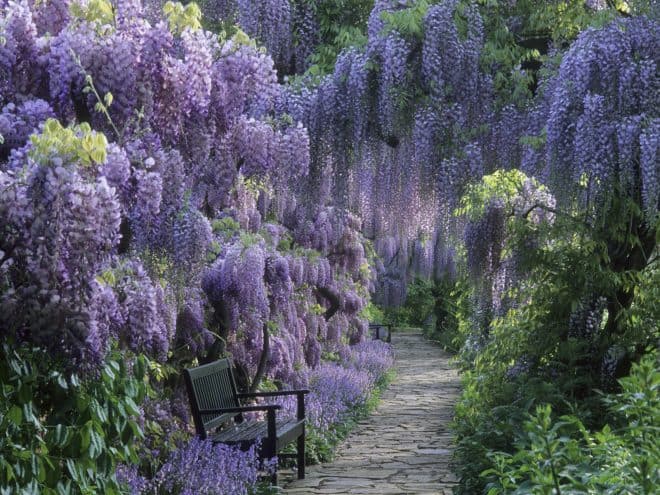 Have you ever been frustrated by the experience of wanting something badly, but never truly being able to have it? No matter how hard you try, it seems as if the universe will provide you glimpses of your desire, but forbids you to have ownership. This has been my experience with the plant Wysteria.

Descending down the hillside on the Isle of Capri, we headed towards the grotto. I’m sure Capri’s tourist attraction was beautiful, but to be frank, I don’t remember it. I don’t even remember if we were heading to the Blue grotto or the Green grotto! What I do recall of that day was our walk down the hill and standing beneath an arbor covered with blooming Wysteria. It was the first time I had ever seen this flower and I was awestruck by its beauty and scent. The grape-like clusters of purple flowers hung underneath a wooden lattice and surrounded me and Kristin. I remember the fragrance was intoxicating. We sat there for a while before continuing our journey down to the water. I fell in love with Wysteria on that day and vowed that I would grow those blooms in my future backyard.

So, 5 years later after purchasing my first home in Shadyside, a section of Pittsburgh, the first thing I did was to plant Wysteria. The plant grew and grew, but didn’t bloom. I read about taking care of Wysteria and learned that it could take a few years for the plant to be mature enough to flower, so I waited. But, after 3 years, no success. I read that by cutting the branches and sometimes the roots, the plant could be stimulated to blossom. So, I did just that. But, pruning didn’t work either. After 7 years, I changed jobs and planned a move to New York City.

Before the internet, securing housing in New York City was difficult. It helped to know people. Rent controlled apartments and other desirable places to live were hard to find. People used to check the obituaries to find vacancies. There weren’t many, if any “For Rent” signs on the street. Using an agent made the process less onerous, especially if one was moving to the big apple from out of town. My two closest friends, both living in the East village, a neighborhood of Manhattan, didn’t know anyone influential. My hope was to live somewhere near them. My only real “want” for housing was to have outdoor space. That way my two cats, who had been used to roaming Shadyside, could get spend some time outside. I contacted an agency and planned a trip to the city.

The weekend I visited, the agency had nothing to show me. So my friend, David, and I criss crossed our way through lower Manhattan, starting at 22rd street. We walked across town from 1st Avenue to 9th avenue. Then, walked one block South to 21st street, and walked back down to 1st avenue. We made our way down through the East Village, Greenwich Village, the West Village, and Gramercy. During one of the two days, while walking down West 13th street, I admired a Wysteria vine growing up the facade of a brownstone. It was June and I knew that Wysteria back home had already leafed out. This plant though was oddly in full bloom. I walked up the stairs to the front door of the stone home where I was able to reach and smell the sweet aroma of the flowers. “Wow.”, I said, “This is amazing!” We continued our journey all the way down to Houston street, where the numbered streets began. In all, we must have walked well over 100 city blocks and passed thousands of apartment buildings, brownstones and businesses.

No place to live and a bit disappointed, I got back home to Pittsburgh when the rental agent called. There were now 3 units available with outdoor space. I made a few calls and arranged for the agent to take David to see the units. I couldn’t fly back to New York and I trusted his judgement. He knew my taste.

When he called me later the next day, I asked, “So how were they?”

He said, “Well, you know one place already.”

“Yes. It’s the place with the Wysteria. You’re gonna love that apartment. It’s a split level on both the first and second floors. And, it includes an outdoor patio.”

I was amazed. Out of over a thousand buildings I saw that weekend…

I took the unit “sight unseen” and chuckled as I mailed the first rent check to my new landlord who lived at 69 Fifth Avenue.

When I moved to West 13th street a month later, the first thing I noticed driving up to the Brownstone was that the Wysteria had been removed!

Since then, I have encountered Wysteria in bloom only a few times, each time during a crossroad in my life. I’ve also re-tried to grow the plant. This most recent time, I purchased two mature Wysteria plants, both of which were in full bloom in the greenhouse when I purchased them. But, once they were transplanted into the yard, the blooms quickly dropped off and neither plant ever bloomed again.

Now, 8 years later, I’ve come to accept that Wysteria is more than a plant for me. It is a spiritual beacon. A guide that I cannot have on my own terms. I must simply experience the beauty of the flower when it mysteriously manifests in my life, and take confidence in knowing that its presence is directing me to a new destiny.