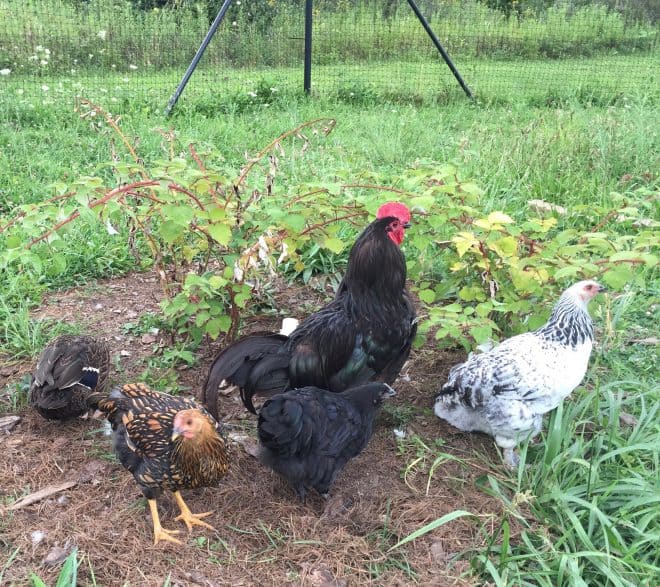 People say naming backyard chickens isn’t a great idea, because frequently, either the birds end up on the dinner table or nature takes it’s toll and predators or disease win out. Despite knowing this, we name the members of our flock. I was told quite directly by my children that they would never eat one of our chickens or ducks, so I decided we would raise them only for their eggs. My children had fun selecting names such as “chick-poof”, “The Jersey Girls”, and ADD “Arthur’s Dumb Duck”.

Although I agreed not to kill our chickens for meat, our benevolent intentions did not shelter our flock from nature. The first year, we lost nearly every chicken to aggressive hawks or night stalking raccoons. The hawks would soar high overhead and caw eerily. The raccoons were unseen. We eventually figured out that they were able to get into the coupe using their little hands in the darkness more adeptly than I could use my own.

Every loss left us with a sense of dread and failure. We continually made improvements to our enclosure. When we were left with one last chicken, we brought her into our home for a few weeks until we could figure out how to completely secure the coupe. We named her TLC for “the last chicken” and kept her safe and well fed.

The final coupe was located in our orchard, surrounded by 8 foot deer fencing. Chicken wire, held into place with nails, staples, bungee cords and bricks enclosed the coupe and attached run. We purchased a new flock of chicks, which TLC raised. The enclosure worked well and all of the chickens, except one, survived the summer. One “Jersey Giant”, named Blackie, had black feathers with a subtle iridescent green mixed in. Her name helped me distinguish her from “Red”, our other Jersey Giant who had a beet red crop. Blackie was a beautiful hen and laid an egg daily. Her eggs were a cream color. Blackie was a renegade and would wander off away from the flock and go scratching and digging in the dirt around the property by herself whenever given the chance.

During the wintertime, we brought the flock up close to the house to protect them from the elements. We felt tremendous satisfaction that we had finally gotten the predators under control. Our chickens had survived through the summer, fall and winter. We were feeling confident that we now knew how to protect them. Upon the transition from winter to spring though, we brought the flock back to the orchard.

In the morning after the move, I went down to the orchard and found a pile of black feathers surrounding our now headless chicken. Blackie was dead. I felt sick. It was my fault. I should have made sure she was secure in the coupe before going into the house the evening before. She must have been terrified. The other chickens were hiding in their coupe, obviously scared. I felt weak and guilty. In a way, I knew I was being a bit silly, yet I couldn’t shake my emotions.

Later in the day, I looked out the window into the backyard with my binoculars and saw a hawk pulling pieces of meat from Blackie’s dead body. When the hawk sensed I was focussing on it, it flew off. Blackie’s body was now part of the food chain. Her spirit must have passed on hours ago.

In addition to the emotional ups and downs of raising poultry, we have had many successes and failures with our fruit trees, our bees and our vegetable garden. In fact, last year, we lost our entire bee colony. Experiences like these help my family connect with their food. What we eat is not merely an abstraction. My children have felt the warmth of freshly laid eggs. We have seen our bees carrying orange bits of nectar into the hive and have tasted the honey made from these bees. We know that by pulling up and eating a carrot, we have ended that carrot’s life.  If we pick lettuce from the garden before dinner, we know we are eating plants that are alive.

Not everyone has the land to grow an orchard or the interest to raise chickens or other farm animals. But if you can, try to grow a garden. At the very least, try to raise a few edible plants or herbs in containers. It’s not difficult and the rewards are vast.

Whether or not you are a carnivore or vegetarian, learn to appreciate the source of your food. For too many, food is the ingestion of a lifeless thing wrapped in plastic wrap or processed material placed in a box, catalogued with stats such as calories, fat content, ingredients, etc. If you think about the source of your food and eat it with respect, the food might taste better and may provide you with a sense of greater nourishment.