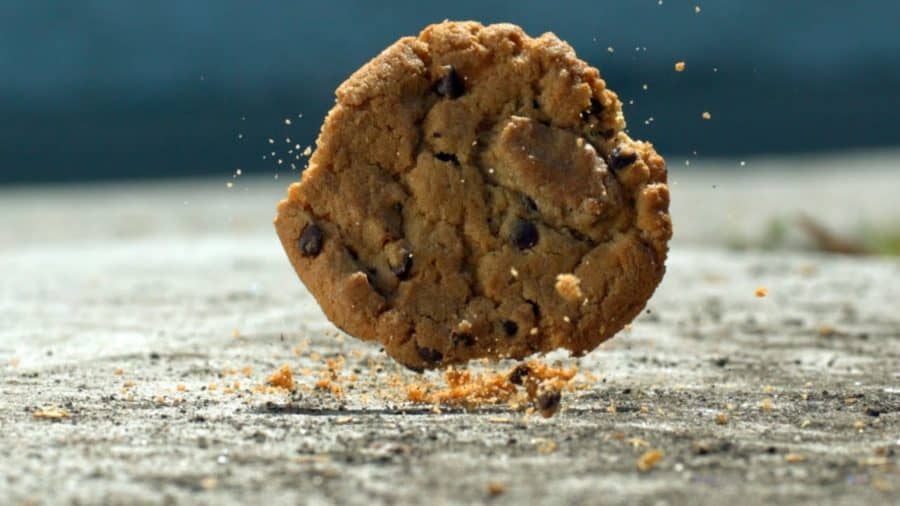 The 5 Second Rule and Fallen Food

The woman knelt down to pick up the chocolate covered strawberry from the floor and called out gleefully, “Three second rule!”

Then, she ate it.

I watched the scene from across the room and chuckled, remembering the rule from childhood. The candy covered fruit was delicious. I understood why she didn’t want to waste even one piece.

On one other recent occasion, I witnessed someone claim a “two second rule” before ceremoniously brushing off and eating a fallen morsel. I imagine that this person thought two seconds was a safer window than three for retrieval.

The rule, more commonly called the “Five second rule”, is based on the notion that bugs on the floor, seen and unseen, will not have enough time to crawl onto a piece of dropped food if the edible is picked up within 5 seconds.

I suppose this rule would be somewhat true for tiny insects like ants. But, bacteria don’t scurry, bacteria stick like grains of sand adherent to food dropped at the beach.

Researchers at Rutgers University recently proved that bacteria can stick to food the instant it hits a floor or dirty counter top. Furthermore, they clarified that the wetter the food and the longer the surface contact, the larger the number of bacteria that will become attached to the food’s surface.

Whereas I agree that eating food off the floor in a public place is risky, bacteria living in one’s home could be considered an extension of one’s microbiome and should usually not cause disease. All bets are off though if family members and guests wear outdoor footwear into the kitchen. Consider that unknown bacteria and viruses can be transported to the kitchen floor along with outdoor chemicals including pesticides, petroleum residues etc. by footwear.

In addition, be on alert if cooking with ingredients such as poultry possibly tainted with disease causing bacteria such as salmonella or E. coli. If contaminated chicken, for example, is placed on a countertop before it is cooked, bacteria on the chicken can contaminate the countertop. If bread is then placed on the countertop where the raw chicken had been, the bread can pick up the bacteria left by the chicken. This is called cross contamination. Unlike the chicken, the bread will not be cooked to a proper temperature to kill off the bacteria and may cause disease if eaten. Similarly, one sneeze can deposit a film of bacteria or virus onto a countertop surface and cause food contamination if someone in the home is ill.

If you consider your floors and countertops to be sanitary and clean enough to eat from, evaluate the ingredients within your cleaning agents. Many floor cleansers and countertop sprays not only remove dirt and accumulated grime, but contain harsh chemicals that will kill off nearly all types of bacteria, mold and viruses, creating a nearly sterile surface. Toxic residues from these products may stick to a dropped piece of food and be could damaging to one’s health.

In our home, we do eat an occasional piece of food from the floor. We frequently clean the kitchen floor and counters with edible household ingredients such as vinegar, water, salt, lemon juice and baking soda. In addition, we take our shoes and sneakers off at the front door and ask guests to do the same.

Finally, if you are seated at a festive dining table covered by a freshly dry-cleaned table linen this holiday season, it is best if you don’t eat food that has been placed or dropped onto the cloth. Dry cleaning chemicals are known to be very toxic and can also quickly leach into a piece of food.

A bit of friendly advice to help you stay healthy and enjoy the season that much more.

Happy holidays to all!

Call it misinformation, disinformation, statistical fudging, or lies. Fake news is more common than most realize. The news story dubbed “Pizza-gate” created a media blitz, yet more insidious forms of misinformation put out in news stories by credible sources goes largely unquestioned by the masses. In contrast to a bizarre, but isolated shooting, fake news produced by governmental agencies has adversely affected the health and well being of millions. Attempts to expose misinformation is often met with anger or dismissive labeling as conspiracy theory.

I recently experienced this phenomenon during a recent luncheon.

Having arrived to the restaurant late, I sat at the one empty seat. Although I didn’t know it, I was seated between two professionals would perfectly illustrate the societal effect of misinformation in real time.

I had recently viewed the documentary “Vaxxed” in which the whistle blower, Dr. William Thompson, discloses that he and his colleagues at the CDC fudged their data in their landmark research study performed to assess the link between autism spectrum disorder and the MMR vaccine. I found the video deeply disturbing and worthy of conversation.

In the film, Dr. Thompson details how the CDC manipulated their data to get an industry favorable result. I described the film’s content in detail to my brunch neighbors.

The guest on my right was a medical research who, in an extraordinary twist of fate, had worked at the CDC during the time of the Autism/MMR study. I was awestruck by the synchronicity. The scientist made a statement that sent shivers up my spine.

”Everything in that movie is true.”

The person to my left, an educator, seemed to become agitated and made the quick proclamation:

“There is no link between autism and vaccines. That was proven years ago.”

I had heard this phrase many times in the past. The words didn’t strike me as powerful, but the certitude and finality with which the statement was delivered caused me to recoil. What I didn’t know at the time was that this person unfortunately had a dear relative who was suffering from a severe form of autism.

This ‘definitive study’ provided our doctors with fake news, i.e. the erroneous conclusion that there is no association between autism and the MMR vaccine. We parents and health care consumers had been taught by our misinformed health care professionals that the MMR vaccine is completely safe.

As most people have no fundamental understanding of how a vaccine actually works, opinions are usually generated to be in agreement with the media and doctors. It is easier to be a member of this team of social consciousness if your children have gone through the vaccination process unscathed. Others however have based their views on horrific personal experience.

Misinformation spread by our governmental agencies is nothing new. In recent months, it was uncovered that the EPA fudged their report regarding the risk to our freshwater supplies from fracking operations. At the nth hour, the report changed from:

Subtle difference? Not for those who have researched fracking and listened to numerous accounts of tainted ground water. The fracking industry held up this misleading, “fake” EPA conclusion to sell fracking as a safe extraction technique.

But, the EPA was caught. As a result, they reworked their assessment and yesterday came to the public announcing that hydraulic fracturing can and has contaminated drinking water.

Is this all really surprising? Our governmental agencies are filled with scientists and other professionals with ties to industry. It is truly a “revolving door”. It is not a stretch to think that researchers might manipulate study results to help further progress their eventual career in industry. As funding is often dependent on industry favored results, it is probably more common than any of us would like to believe, even if those results might be at the expense of the general population’s health.

How do you decide who and what to believe?