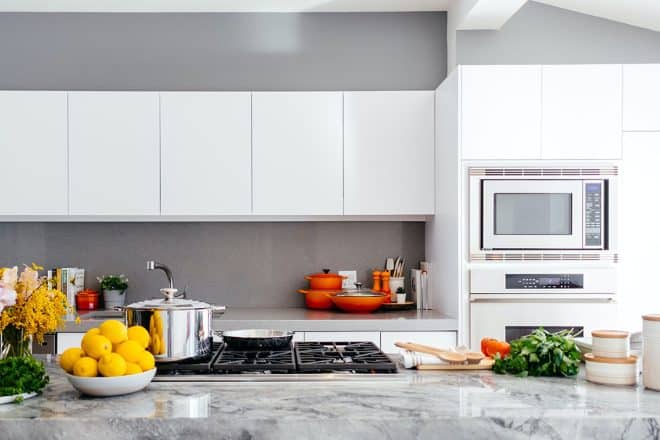 Microwave ovens have been around for decades and were extraordinarily popular for a long time.

Over the years though, disfavor has developed among health groups as the process of cooking food or even heating water with a microwave oven has become controversial. There are two main concerns with using a microwave to prepare food. One is the EMF radiation that is commonly emitted by the machine when it’s operating. The other concern involves what the microwave actually does to the food in order to cook it.

When food is “nuked” in a microwave, a component of the electromagnetic spectrum with a wavelength just shorter than a radio wave transmits energy to water molecules within the food, causing them to vibrate. This vibration generates heat, which then passes into the surrounding food. Foods that contain more water will heat up more quickly than foods that are drier. This explains why heating foods in a microwave may result in uneven cooking. Portions of food not brought to proper temperature can raise health concerns as potential pathogenic bacteria may not be destroyed in the incompletely cooked cold spots.

Microwaves affect the nutrients in food along with water, and scientists are still trying to understand the myriad of conflicting effects that microwaves can have on food. Some studies suggest minimal effect on the bioavailability of nutrients while others show a clear nutrient degradation. However, all cooking methods can affect the nutritional value of food.

A study designed by a Swiss researcher named Hans Hertel was the first to question the effects of microwave radiation on a food’s nutritional value. His conclusions were that not only does microwave cooking change the nutrients in food, but that people who eat microwaved food have changes in their blood chemistry that show “deterioration.” His research, published in Search for Health in 1992 and also in Acres USA, a publication dedicated to organic and sustainable farming, in the United States in 1994, went so far as to state that eating microwaved food causes cancer-type effects in the blood. He was quickly attacked by industry representatives and subsequently censored by the courts. The question of are microwave ovens safe is controversial, not least because of how much money corporations will spend to ensure that the public believes that they are.

In 1991, a woman was injected with blood serum that had been microwaved to bring it to proper temperature, and she died as a result. It has been determined that blood products, namely proteins in the blood, are somehow damaged or altered by microwaves. I’m not suggesting that you could abruptly die from eating microwaved food, but it does seem clear that the proteins, fats, and other components of the food that you are eating can be “changed” by the microwaving process, just as the blood was “changed” in this unfortunate death. Although the alteration of food materials is poorly defined at this time, it is reasonable to assume that microwaving can affect digestibility and nutritional value.

Although perhaps less professionally scientific and certainly not peer- reviewed, my daughter did her own experiment for school in which she tried to grow potatoes in different sources of water to see if the type of water the potatoes were placed in would have an effect on their growth rate. Six different samples of water were tested, including distilled water, tap water, bottled water, pond water, filtered water, and water that had been previously microwaved for five minutes and then cooled back down to room temperature. Each category of water was tested three times by suspending an organic potato in each glass of water with toothpicks.

All of the potatoes grew except for those grown in the microwaved water samples. The three potatoes placed in the microwaved water all shriveled up and died! Why? I have no idea. If you enjoy the convenience of the microwave and are skeptical of its effect on food, this is an easy experiment that you can try at home. Make sure to use organic potatoes, because conventional varieties sold in markets may have been sprayed with a chemical agent to prevent sprouting.

To witness microwaved water’s effect on the growth of a plant begs the question, What kind of effect does microwaved water have on the body? You may be convinced that even drinking the microwaved water of a hot beverage can have a detrimental effect on your health. Suddenly, even heating up a cup of coffee in the morning with a microwave oven doesn’t seem like such a good idea.

Because of the results of our potato experiment, I came to my own conclusion in terms of are microwave ovens safe: We tossed it out three years ago and I can’t say I’ve ever missed it.