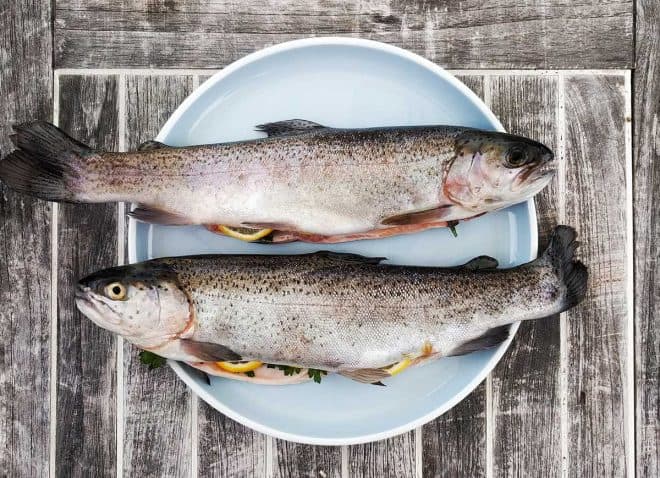 Fish and seafood are an excellent source of protein and nutrition, but it can be hard to know the safe fish to eat, as the world’s oceans have become polluted with materials ranging from plastics to hard metals. Mercury is the third most toxic naturally occurring substance in the world, behind lead and arsenic. Methyl mercury is the most toxic contaminant in the world’s fish. Coal-fired power plants, which emit particulates into the air, including mercury, have rained toxins upon the world’s oceans, elevating mercury levels in the fish that live there. Thankfully, these plants are slowly either being phased out or retrofitted with scrubbers that remove dangerous contaminants before exhaust is emitted into the air.

I taught my children about the mercury in fish early in their lives. During a beach vacation one summer, my family and some friends were waiting on a dock to embark on an evening cruise boat so we could enjoy the sunset on the water. Fishermen had come in from a day at sea and were busy cleaning their catch. My children were fascinated as a man cut the head off of a beautiful yellowfin tuna and gutted it. I watched from afar, letting them both have a bit of independence on their vacation. After a few minutes though, my seven-year-old son screamed out, “Eww! I can see the mercury!” The fisherman looked at my child and then at me with horror and said, “There’s no mercury in this fish!” Afterward, he muttered some words about how the world was being ruined by environmentalists and the like. I corrected my son and told him that he was not “seeing” the mercury, but that it was still in there.

How can I know the safe fish to eat?

Mercury bioaccumulates. Therefore, in general, the larger the fish, the greater the concentration of mercury and the more you eat of them, the more that will accumulate in your body. Small fish haven’t had enough time to accumulate as much of the toxin. Keep in mind that no amount of mercury is good for you. Mercury is a neurotoxin and can cause all kinds of problems in adults, including nervousness, muscle twitching, tremors, decreased cognition, and muscle atrophy. Mercury can affect a child’s development and can cause fetal anomalies in pregnant women. For this reason, children and pregnant women should be especially careful not to eat too much fish. The EPA set up guidelines based on body weight, designating the maximum mercury intake per day to be 0.1 micrograms per kilogram (2.2 pounds) per day. That equates to 7 micrograms per day, or 49 micrograms a week for a 70-kilogram (154-pound) person.

Fish that contain the highest levels of mercury include tilefish, shark, swordfish, king mackerel, and some types of tuna, including bigeye and ahi. Apologies to my fellow sushi lovers—these types of fish have been documented to contain over 100 micrograms of mercury in 4 ounces and should be avoided.

A middle tier of fish that contains between 40 and 80 micrograms of mercury per 4 ounces of cooked fish includes bluefin tuna and albacore tuna, canned white tuna (other than light tuna), yellowfin tuna, marlin, skipjack tuna, and lobster.

Lower levels of mercury have been found in salmon, light tuna (canned), pollock, tilapia, catfish, trout, and cod. Calamari (squid), clams, oysters, and shrimp also fall into this category. These species contain fewer than 40 micrograms of mercury per 4 ounces.

Research has been performed weighing the risk of mercury toxicity with the benefits of eating micronutrients and omega-3 fatty acids from fish, and the EPA-FDA recommendations for 2017 are for women and children to eat two to three servings of fish per week—one serving from the middle tier and the remaining serving(s) from the lowest tier. Children under 10 should eat no more than three ounces of fish per week if the type of fish being eaten contains mercury. If you aren’t sure how much this is, buy a small food scale. You’ll be surprised at how little that actually is.

The Natural Resources Defense Council website (www.nrdc.org) lists types of fish and rates each variety by its level of typical mercury contamination. Familiarize yourself with this list and refer to it for the safe fish to eat while you are shopping or eating out. Another great resource for safe fish to eat is www.SeafoodWatch.org. The easiest way to approach buying fish is to do some homework before going to the store. Pick out your favorite types of fish and figure out using a calculator what amount of fish you and your family can safely eat in a meal. Remember that the weights are based on the weight of the fish after it is cooked, so take that into consideration before your purchase.

The mercury levels listed are based on wild-caught fish. Farm-raised fish have a more controlled diet, and may therefore contain lower amounts of mercury than wild-caught fish. But these fish are typically raised in sectioned-off areas of offshore seawater, where they are potentially exposed to sources of pollution run-off from the land, including PCBs and dioxins. This is important to consider since dioxins are very difficult to get rid of once they are in your body—their half-life in the human body has been measured to be 7.1 years! The most common varieties of fish now raised in farms include salmon, tilapia, sea bass, catfish, and cod. Farm-raised fish are fed feed, commonly including grains such as GMO corn and soy, which, as previously mentioned, may contain traces of pesticides and herbicides. Farm-raised fish are also commonly fed antibiotics to keep diseases and pests under control. With the exception of methyl mercury, most toxins are stored in the skin and fat, so it is best to trim off the fat and skin before eating any fish.

Mussels have been shown to accumulate high levels of butyltin compounds, a chemical used in plastics and boat maintenance products. Unfortunately, this problem isn’t going away anytime soon as these compounds don’t degrade quickly and have been found in mussels even five years after bans on the chemicals have gone into effect in some countries. Butyltin is an endocrine disruptor and a toxin that can impair the immune and central nervous systems. For this reason, it is best to limit your consumption of mussels.

Aside from fish, shrimp is the most commonly eaten seafood in the US. Would you believe that only 2% of the shrimp imported into this country is inspected by US regulatory agencies? Most shrimp is farm-raised and, like other types of fish, can be contaminated with a myriad of heavy metals and chemicals, including pesticides, dioxins and PCBs. Shrimp contaminated with antibiotics banned in the US, such as chloramphenicol and nitrofuran, a known carcinogen, arise on occasion. Curiously, there are no research articles proving or disproving the safety of shrimp from the Gulf of Mexico after the notorious Gulf oil spill and subsequent spraying of over a million gallons of Corexit, a toxic oil dispersant. For this reason, I opt for fish from other locales. It’s harder to find wild-caught shrimp in the grocery store, but it can always be ordered online.