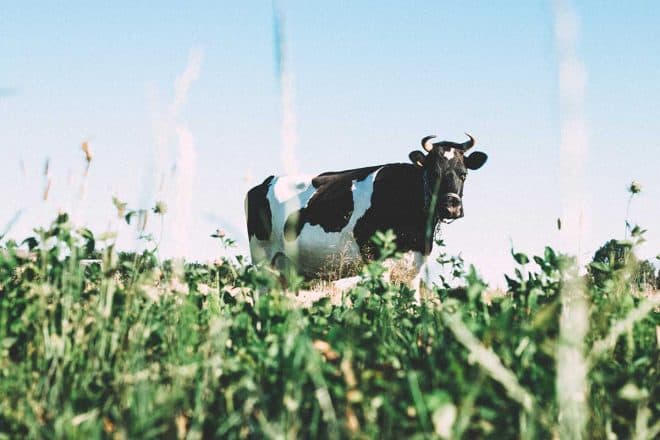 It’s important to know the difference between healthy dairy products and products that may have been compromised by current practices.

There are many different varieties of milk in the market. The most natural milk product is unprocessed “raw milk,” only sold in select markets. Raw milk is better tasting and teeming with its own microbiome, which has beneficial health effects, including protecting children from the development of allergies. But there is an increased risk of acquiring an infection from drinking raw milk. Most retailers sell milk which has been pasteurized or ultra-pasteurized and homogenized. Further processing creates subcategories of whole milk, including 2% milk, 1% milk, fat-free milk, lactose-free milk, and others.

Ultra-pasteurization has been around since 1993 in the US, but was used in Europe for many years before. During this process, milk is heated to 280°F with steam for two seconds and then rapidly cooled, killing virtually all of the bacteria within the milk. Most conventional milk and almost all organic milk in the US are now ultra-pasteurized. This technology increases the shelf life from one or two weeks to several months, which is efficient for a supermarket that doesn’t want to worry about its milk spoiling too fast. During ultra-pasteurization, though, some milk proteins become denatured, meaning that they lose their structure, function, and perhaps digestibility. Perhaps even more important, nutritional value is diminished for milk that has been ultra-pasteurized. Paying higher prices for organic milk that has been ultra-pasteurized may seem silly, yet these products do have fewer contaminants than their conventional alternatives.

Dairy cattle in the US are raised differently from beef cattle. Dairy cattle can be injected with a synthetic form of growth hormone called recombinant bovine somatotropin (rBGH), developed by Monsanto, which stimulates cattle, goats, and sheep to produce more milk. Milk produced by cows treated with rBGH is associated with increased levels of the hormone insulin-like growth factor (IGF-1). The American Cancer Society has questioned whether or not there is a link between IGF-1 and cancer. To date, no direct link has been defined, but many countries, including the EU, have banned the use of rBGH. Due to a backlash from the public on this technology, there has been a drop-off of its use over the years — a boon for the marketplace in terms of the availability of healthy dairy products, but other problems remain.

Milk production in the US is also associated with markedly elevated levels of estrogen and progesterone, the female sex hormones. This may be related to the practice of artificially inseminating cattle while they are still producing milk from their previous pregnancies, which increases milk production. This practice occurs on conventional as well as organic farms. Many scientists have questioned whether or not the development of human cancers, such as breast, ovarian, and uterine cancer, is associated with the elevated female sex hormone levels in commercial milk. Statistical analysis has also shown that men who drink whole milk increase their risk of developing and dying from prostate cancer.

As a result of excessive milk production stimulated by rBGH administered from 60 to 305 days during the lactation period, cattle suffered a 25% increase in udder infections, known as mastitis, during this treatment period. This painful condition can release pus and bacteria into the milk. If the milk is subsequently pasteurized, ultra-pasteurized, and homogenized, any potential pathogens in the milk are killed. However, the cattle raised in conventional farms are given antibiotics to treat mastitis. In addition, most dairy cattle are prophylactically injected with antibiotics each year to prevent them from getting the condition. Residue of the circulating antibiotics in the cow’s blood can then be secreted into the milk. As a result, some milk contains traces of antibiotics, some of which, the FDA recently discovered, have not even been approved for use in dairy cattle.

Dairy products made from conventional milk, such as butter, cheese, sour cream, whipped cream, half-and-half, and heavy cream, are all made from the same dairy farms that inject their cattle with antibiotics, and yes, antibiotics have also been found in these foods — making it difficult to be sure about what constitutes healthy dairy products. Organic milk producers are forbidden to treat mastitis with antibiotics, and therefore take greater care to ensure their animals are living in clean quarters and have healthy immune systems. Given the status of the US dairy market, I opt to feed my family organic dairy products, but sparingly.