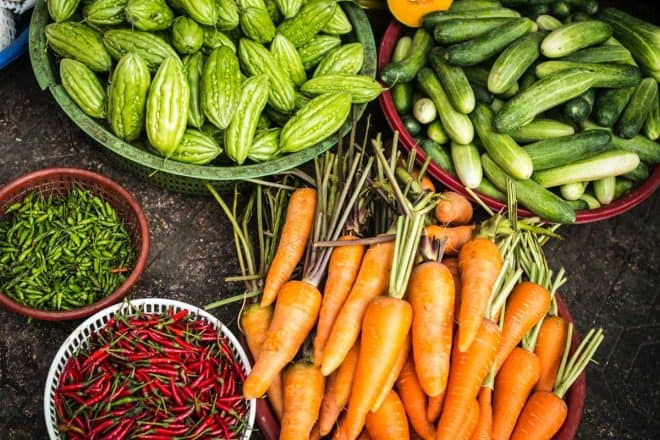 Pesticides in produce is one of the most important problems faced by consumers today.

Perhaps the section of the supermarket that has gotten the most attention from food activists in recent years is the first section you typically walk into, the produce section. One of the biggest concerns in eating fruits and vegetables from a “conventional” market is the residue of pesticides, fungicides, and herbicides applied during the growing process. Stabilizers and other processing techniques designed to improve shelf life and product appeal are also suspect.

Anyone who has tried to grow an organic garden or orchard will agree that fighting off Mother Nature’s creatures is a full-time task that can be daunting. Considering the ubiquitous presence of insects, weeds, and fungal diseases, it is no wonder that commercial growers have relied on pesticides, herbicides, and fungicides in order to help produce healthy and sizable harvests. Without these chemical products, there would be a lot less fruit and vegetables for us all to eat.

There are hundreds, perhaps even thousands, of different types of chemicals on the market to help growers produce bountiful harvests. Some chemicals are considered organic, and others conventional, or nonorganic. Organic sprays are considered more ecologically responsible and safe, but both of these types of sprays need to be removed from the food before it is eaten. If the skin on the fruit’s surface is porous, the chemicals will be absorbed into the cuticle. For this reason, I prefer organic fruits and vegetables. Pesticide residues will adhere the most to fruits and vegetables that contain a soft skin or waxy surface and should be removed with the aid of a fruit and vegetable spray wash, as many pesticides are not water soluble. Peeling the fruit will remove the greatest amount of pesticide residue, and avoid some of the hazards of pesticides in produce.

There is a helpful resource produced by the Environmental Working Group (EWG), a nonprofit environmental research organization, that categorizes produce into the varieties that contain the most and least pesticide residue during a given year. In 2017, the foods that contained the greatest number of pesticides in the highest concentration, also known as the “dirty dozen,” included:

The EWG found that nonorganic leafy greens, including kale, lettuce, and collard greens, as well as hot peppers, were frequently contaminated with insecticides toxic to the human nervous system and that only organic versions should be eaten.

In 2017, the foods that contained the least amount of pesticide residue included:

There have been many scientific studies linking pesticide exposure to all kinds of health problems, including hormonal and reproductive problems as well as many different kinds of cancer, particularly in children. Several long-term observational studies have indicated that organophosphate insecticides may impair children’s brain development. In 2012, the American Academy of Pediatrics issued a report specifying that children have a “unique susceptibility to the toxic effects of pesticide residue.” Pesticides in produce — and elsewhere — are damaging to our health and care should be taken to avoid inadvertently ingesting them.

Genetically modified organisms (GMOs) present a unique problem in that the pesticides and herbicides in these vegetables cannot always be washed off. GMOs are typically grown in herbicide-laden soil, and may have their DNA engineered to produce their own pesticides, thereby killing any insects that try and eat them. Unfortunately for us, the same corn kernel or soy bean that we eat contains the pesticide internally, which cannot be washed off. These herbicide-containing and pesticide- producing plants, when eaten, may have negative health effects that we do not completely understand. There is concern that our microbiome can be severely damaged by ingesting pesticides. This may be causing a significant increase in digestive disorders, including obesity and diabetes.

The GMO story began with the creation of a chemical called glyphosate by Stafford Chemical in 1960. This chemical was created to bind with metals and was used as a descaling agent to clean industrial pipes of mineral deposits. The chemical company Monsanto purchased the chemical in 1969 and re-patented it as a nonselective herbicide. Thus, Roundup was born. Any homeowner or lawn maintenance worker will tell you that it is a lot easier to spray a chemical such as Roundup on a plant to kill it than it is to manually remove the plant with its roots.

Monsanto subsequently spent many years in the field of biotechnology, creating seeds that could grow in the presence of glyphosate. The idea was that it would be convenient for growers (and hugely profitable for Monsanto) to kill all the weeds in a field with Roundup and then grow a crop on the treated soil without the need for weeding during the growing season. In 1996, Monsanto created soybean seeds and corn seeds that could do just that, known as Roundup-ready soybeans and Roundup- ready corn. Farmers could spray their fields with Roundup and then plant the Roundup-ready seeds for a productive and reliable harvest. This technology was incredibly successful. By 2014, most soy and corn grown around the country was genetically modified. In 2016, according to the USDA, 92% of corn and 94% of soybean crops planted in the US were genetically modified. Since the advent of Roundup-ready soy and Roundup-ready corn, Monsanto and other companies such as Dow and Dupont have created further GMO varieties, including sugar beets, canola, squash, and Hawaiian papaya. GMO varieties of wheat have also been the subject of experimentation, along with many other types of vegetables.

Unfortunately, as research has slowly accumulated, we are discovering that this biotechnology is not without significant health costs to all who eat these foods, including our cattle, chickens, and pigs, as well as our dogs and cats. Although the USDA declared GMO foods to be substantially equivalent to their non-GMO counterparts, the nutritional value of GMO foods is not equal to non-GMO food. This is at least in part due to the chelating properties of glyphosate. Glyphosate has been found to cause mineral depletion in the GMO soybeans and in other GMO plants.

Furthermore, GMO plants grown in soil treated with glyphosate absorb the chemical, depositing it in the plant’s cells. This means that there are traces of glyphosate in the soybeans and corn kernels used to feed our livestock and to produce processed foods—in other words, in the entire industrial food supply.

Glyphosate is an herbicide and has been found to be an effective antibiotic. In fact, in 2010, Monsanto received a patent for Roundup to be considered an antibiotic at concentrations as low as 1-2 mg per kg of body weight. But scientists have shown that glyphosate disrupts the microbiome. Eating foods laced with Roundup therefore can affect our digestion by killing off intestinal bacteria that produce nutrients and vitamins but also by binding to nutrients, making them unusable.

Damaging the microbiome does more to your health than affect your digestion or cause some diarrhea. A damaged microbiome has been associated with a hypersensitive immune system, resulting in asthma and increased allergies. The conclusion of some researchers is that celiac disease, also known as sprue, has little to do with gluten sensitivity, but more to do with a glyphosate-damaged microbiome. Know anyone with celiac disease? Twenty years ago, it was extremely rare. Today, it is unfortunately very common.

Perhaps one of the most concerning properties of glyphosate is that it does not get expelled with stool. After eating a vegetable or other food that contains glyphosate, some glyphosate will be absorbed by the intestine, where it can damage the intestinal lining. Glyphosate has been found in human urine and has been shown to bioaccumulate in the kidneys, liver, spleen, and muscles in animals. Once absorbed, glyphosate has been shown to disrupt the endocrine system. It has also been shown to induce breast cancer growth. Studies have shown that higher levels of glyphosate residue have been found in the urine of chronically ill people. In fact, the EPA website states that people drinking water containing more than 0.7 ppm of glyphosate may develop kidney problems and infertility.

Although the EPA acknowledges glyphosate as a food contaminant and has established legal residue limits, the FDA has been criticized for failing to disclose that they don’t test food for residues from glyphosate and many other commonly used pesticides. In addition, maximum residue levels (MRLs) have increased considerably over the years in the US and in other countries utilizing GMO technology in order to accommodate the new reality that glyphosate residue is ubiquitous within the food supply.

Some researchers have concluded that the widespread usage of herbicides and pesticides in produce has caused epidemics of inflammatory and degenerative diseases, as well as all kinds of cancer, autism, and obesity, which have developed over the past twenty years. Although many types of environmental toxins have been on the rise, the manipulation of our food supply has most likely had profound effects on society’s overall health.