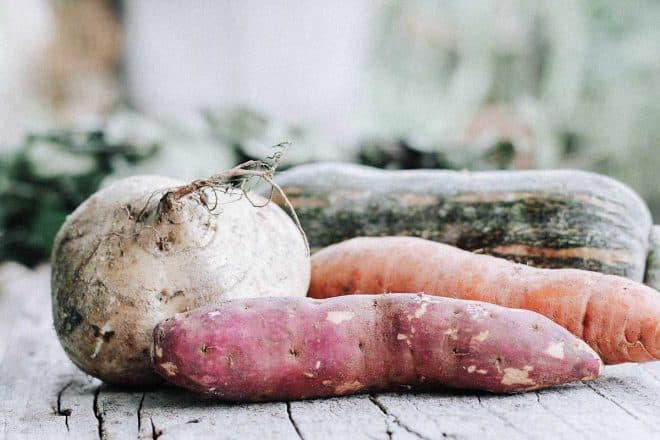 If you have been around a while, you may remember going to the market and seeing “eyes” in the potatoes that would sprout if the potatoes were left on the shelf for too long. For many years now, root vegetables such as onions, potatoes, and carrots have been sprayed during growth with an herbicide that functions as an anti-sprouting chemical, preventing the vegetable from continuing its life cycle after harvest. The chemical, typically chlorpropham or maleic hydrazide, prevents cellular division. Yes, this chemical can affect human cellular division, too. And residues of this chemical have been found on potato samples and even in potato chips! Japan and the EU have placed strict limitations on the usage of anti-sprouting chemicals, but there are no regulations for their usage in the US. For this reason, it is best to buy organic root vegetables.

A few things to remember — even when cooking with organic root vegetables. Consider that potato sprouts are poisonous and should never be eaten. In addition, potatoes that have been exposed to light will turn green due to the stimulation of chlorophyll formation. The green parts of a potato contain the greatest concentration of alkaloids such as solanine, which can cause many symptoms, including increased sensitivity, shortness of breath, and gastrointestinal symptoms such as abdominal pain, nausea, diarrhea, and vomiting in higher concentrations. For this reason, keep your potatoes in a cool, dark place, cut out any green areas and remove sprouts before cooking and eating them.