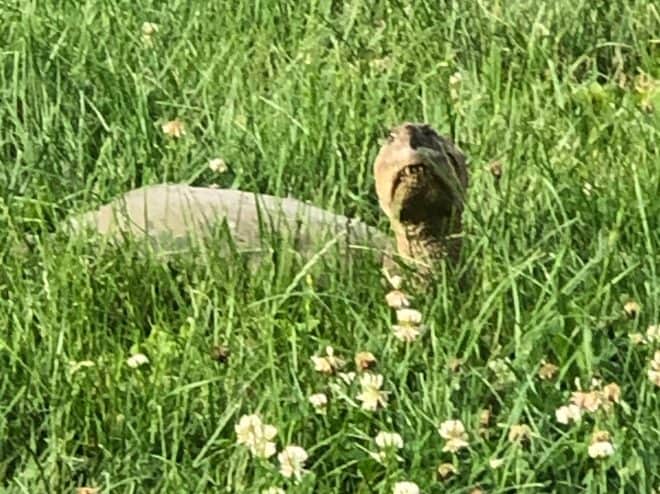 Sometimes a series of events in space and time are so beyond coincidence they speak from a greater mind… a true gift of manifestation. Today, I experienced this wonder.

Like many of you, I work from my home. My office was designed with floor to ceiling windows affording a serene view. Occasional glances at the grassy slope, stream and pond allow me to regain peace and calm during stressful moments. Ducks, turkey, geese, hawks, and occasionally, even a blue heron can be spotted at the pond. 10 years ago, my neighbor told me he saw a very large turtle down there. He described it at the time as being “as big as a dinner plate!”

I watched and waited for my opportunity to see the turtle. I mowed the lawn, walked the property and looked out the window, but never saw the turtle. I began to think my neighbor had pranked me and that it didn’t really exist. That is… until today.

While working this morning, I heard Bernie, our over-sized Alaskan Malamute, barking in the backyard. He isn’t particularly vocal and so when I heard his low growl and sporadic barks, I stopped my work to look outside. I spotted him on the outside perimeter of his, now fragmented, dog fence lunging back and forth while focusing on a spot in the grass. I put my bathrobe on and walked outside. As I approached the scene, I saw a large brown disc up on-end and then disappear.

“Bernie, what do you have there? Is that a snake?” I said quietly.

As I got closer, I saw the shell of a large turtle. The head, feet, and tail were pulled in. The shell alone was at least 15 inches in length!

The dog reluctantly ran away from the turtle, pranced in a circle, avoiding my gaze. It wasn’t long though before he gave up and slowly walked back to me, tongue lolling. I held his collar as we walked back to the house. Once inside, I sat down at my desk bewildered. I had finally seen the legendary turtle! Concerned that Bernie had injured the reptile, I made a mental note to check out the yard after my shift was over.

Bernie fell asleep on the floor. Not more than 10 minutes later, I looked outside and saw this brown baseball sized turtle head looking at me! The turtle stood in the grass 6 feet from my office window with its head and neck fully extended, resembling ET. I stood up and walked to the window to get a closer look. This creature had walked at least 200 feet to get to the house. But why? It stared at me for at least 5 minutes before turning around. It then slowly lumbered down the hill and was gone.

It was a spiritual encounter during which the turtle acknowledged me. I reflected on this unique experience and it’s underlying meaning. The turtle is an auspicious symbol, representing prosperity, strength, and good health. The rest of my morning was magical.

It wasn’t until later, though, that I realized the complexity and deeper message behind the turtle’s appearance.

While getting into the shower, my mind cleared and I muttered “The Tortoise and the Hare”.

I wasn’t quite sure why I had said it. But then, realized it was, indeed, an allusion. It suddenly dawned on me that it was only one day earlier that I had seen a rabbit in the backyard. Bernie had been active that day too. He had grabbed a rabbit from the yard and brought it to the same plot of grass that the turtle sat in today. I witnessed the rabbit’s decapitation and dismemberment. The dog ate the whole thing without leaving a trace.

I viewed both of these vignettes while sitting in the same chair, while looking through the same window pane, at the same piece of grass on one day and then the next. The sequence of events was not only an extraordinary coincidence, but also conveyed and important message.

So what does it mean?

Have you read Aesop’s fable The Tortoise and the Hare? It is a story of an overly confident hare who, while in a race with a tortoise, proceeds to take a nap before crossing the finish line. Upon awakening, the hare learns he has lost the event to the persistent, slow moving, and careful tortoise.

In this tale, going to sleep can represent a metaphor for becoming unconscious of one’s actions. When focus is lost, a planned destiny will not manifest. In my yard, not only did the hare lose the race, it lost its life to a predator.

After much thought, I’ve concluded that this was a message to remain vigilant and careful. I am tempted to go out to restaurants, vacation at the beach, and visit with friends, but this was an important reminder of the need to remain cautious and protected. I, like all of you, want to finish this race unscathed.

Yes. Perhaps this is a lesson for all of us. Slow and steady wins the race!