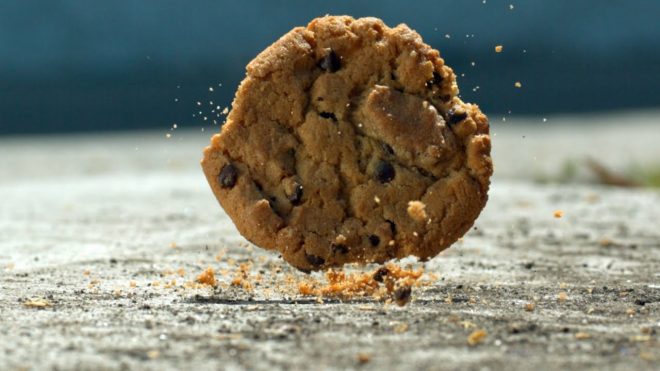 The woman knelt down to pick up the chocolate covered strawberry from the floor and called out gleefully, “Three second rule!”

Then, she ate it.

I watched the scene from across the room and chuckled, remembering the rule from childhood. The candy covered fruit was delicious. I understood why she didn’t want to waste even one piece.

On one other recent occasion, I witnessed someone claim a “two second rule” before ceremoniously brushing off and eating a fallen morsel. I imagine that this person thought two seconds was a safer window than three for retrieval.

The rule, more commonly called the “Five second rule”, is based on the notion that bugs on the floor, seen and unseen, will not have enough time to crawl onto a piece of dropped food if the edible is picked up within 5 seconds.

I suppose this rule would be somewhat true for tiny insects like ants. But, bacteria don’t scurry, bacteria stick like grains of sand adherent to food dropped at the beach.

Researchers at Rutgers University recently proved that bacteria can stick to food the instant it hits a floor or dirty counter top. Furthermore, they clarified that the wetter the food and the longer the surface contact, the larger the number of bacteria that will become attached to the food’s surface.

Whereas I agree that eating food off the floor in a public place is risky, bacteria living in one’s home could be considered an extension of one’s microbiome and should usually not cause disease. All bets are off though if family members and guests wear outdoor footwear into the kitchen. Consider that unknown bacteria and viruses can be transported to the kitchen floor along with outdoor chemicals including pesticides, petroleum residues etc. by footwear.

In addition, be on alert if cooking with ingredients such as poultry possibly tainted with disease causing bacteria such as salmonella or E. coli. If contaminated chicken, for example, is placed on a countertop before it is cooked, bacteria on the chicken can contaminate the countertop. If bread is then placed on the countertop where the raw chicken had been, the bread can pick up the bacteria left by the chicken. This is called cross contamination. Unlike the chicken, the bread will not be cooked to a proper temperature to kill off the bacteria and may cause disease if eaten. Similarly, one sneeze can deposit a film of bacteria or virus onto a countertop surface and cause food contamination if someone in the home is ill.

If you consider your floors and countertops to be sanitary and clean enough to eat from, evaluate the ingredients within your cleaning agents. Many floor cleansers and countertop sprays not only remove dirt and accumulated grime, but contain harsh chemicals that will kill off nearly all types of bacteria, mold and viruses, creating a nearly sterile surface. Toxic residues from these products may stick to a dropped piece of food and be could damaging to one’s health.

In our home, we do eat an occasional piece of food from the floor. We frequently clean the kitchen floor and counters with edible household ingredients such as vinegar, water, salt, lemon juice and baking soda. In addition, we take our shoes and sneakers off at the front door and ask guests to do the same.

Finally, if you are seated at a festive dining table covered by a freshly dry-cleaned table linen this holiday season, it is best if you don’t eat food that has been placed or dropped onto the cloth. Dry cleaning chemicals are known to be very toxic and can also quickly leach into a piece of food.

A bit of friendly advice to help you stay healthy and enjoy the season that much more.

Happy holidays to all!