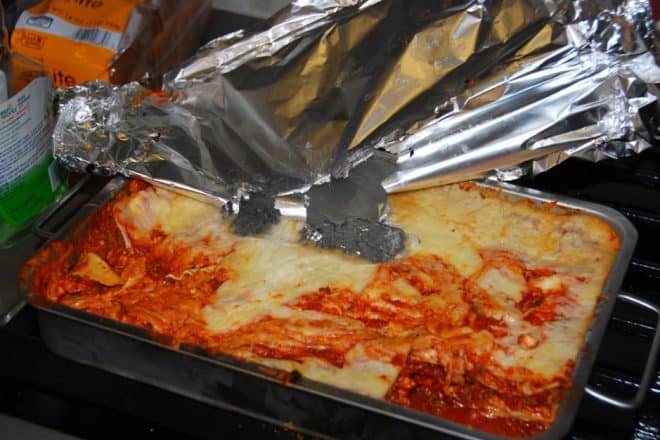 My journey to an aluminum foil alternative began inconspicuously enough: When I first opened this particular package of aluminum foil, it seemed fine. Perhaps it was because the lighting was bright or I just wasn’t paying attention. But when I went to wrap the dinner leftovers later that evening, I noticed a peculiar rainbow type pattern on one side of the foil. It was a smear that ran lengthwise on the roll. I thought that maybe it was too old or had somehow mildewed from being in the basement too long, which has a tendency to be damp. I unravelled the roll a few feet to try and find foil that looked more normal, but had no luck. Hurried, I chose to make sure that the weird looking side of the foil was facing away from the food, so it didn’t contaminate the food with whatever this stuff was.  Somewhere, I had heard that there was one side of the aluminum foil you didn’t want to have contact your food anyway. This became my modus operandi for the next few weeks. But, each time I handled the foil, I was irked by the blemish. Finally, I threw the box into the recycling garbage. I was pleased with myself for being willing to toss it out, for I’m usually one who doesn’t like to “waste” things.

As if I had been living a bad dream, when I opened the food wrap drawer to make school lunches the following night, that roll of tarnished aluminum foil was back in the drawer! Someone must have salvaged the foil out of the garbage. Ugh. Now, I had to throw the foil out a second time. Not wanting to make a habit of this, I buried the foil deep in the garbage so no one would dare go and get it out. Then, I turned the computer on and began researching aluminum foil. It turns out, after almost 70 years after this invention, it’s not a product you want to have routinely touch your food.

Foil is fine for a wrapping most cold dishes, as long as the food isn’t acidic. Wrapping a sandwich is fine. When aluminum is wrapped on food and heated, the foil releases tiny aluminum particles into the food it is protecting from drying out. Leaching also happens at room temperature when the foil is resting comfortably on an acidic food, such as tomato sauce. How many times have I not only wrapped my leftover spaghetti and sauce with aluminum foil, but then placed the dish along with the foil in the oven to reheat the meal?!

Aluminum is a heavy metal that is toxic to your nervous system. You don’t want to eat it. There is an association between aluminum and neurodegenerative diseases such as Alzheimer’s disease and Parkinson’s disease.

Consider a useful aluminum foil alternative: unbleached parchment paper. I prefer the “If You Care” brand that uses silicone for a nonstick coating instead of other chemicals. It’s cheap, clean and it will provide an appropriate barrier between your food and your aluminum foil. Put your food in a Pyrex dish, CorningWare or a ceramic dish and first cover your food with parchment paper, and then wrap with foil. You can reheat your food in the oven with the parchment paper under the foil. It’s a simple solution to reduce your exposure to a common household toxic heavy metal.