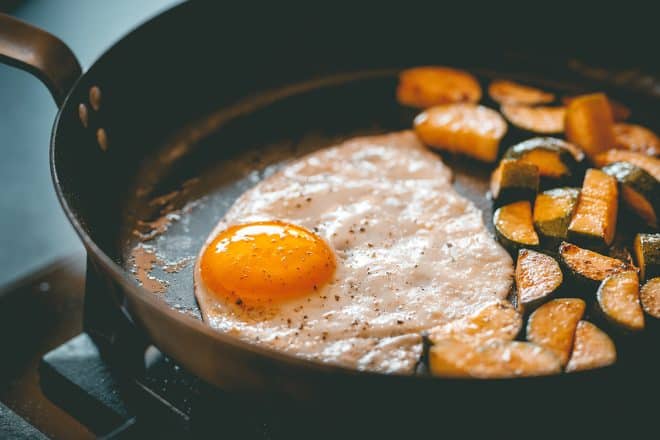 Health risks and non-stick pans: This is an important issue you should consider as you consider how you prepare your food at home.

Perhaps one of the most controversial items in the kitchen is the nonstick surface found on cookware.

It makes cleanup a breeze, allows one to easily manipulate the ingredients being cooked, and prevents tearing or otherwise compromising the appearance of the finished product. But do you know what goes into making a nonstick surface – and the potential health risks of non-stick pans?

The nonstick concept originated with the discovery of a fluoropolymer called Teflon. Teflon is the brand name for a slippery chemical called polytetrafluoroethylene (PTFE), which was created and first marketed in 1945 by the DuPont Company. This chemical was subsequently applied to cookware in 1956 by a French engineer, who in that same year founded the Tefal Corporation (T-fal) with his wife. Since then, many companies have developed other fluoropolymers that are different from PTFE.

Fluoropolymers have been used in the production of cookware for a long time now, and over that time span, have been implicated in some disturbing health effects. One of the most publicized of these concerns was the recognition of the biopersistence of a contaminant in PTFE, a chemical used in its production known as perfluorooctanoid acid (PFOA). Since the 1990s, this compound (also called “C8”) has been found at low levels throughout the environment and in the U.S. population as measured in the blood supply. It will remain in people for a very long time, for there is no way for the human body to eliminate it. PFOA has been associated with many adverse health effects in people and animals.

People with occupational exposure to higher levels of PFOA have been shown to have an increased incidence of ulcerative colitis and rheumatoid arthritis. Research has been conducted to study the health effects of PFOA at lower concentrations, but these studies are much fewer in number. Links have been made between PFOA exposure and kidney cancer and bladder cancer, non-hepatitis liver disease, and thyroid disease. Certainly concentration, chronicity, and individual immunologic response would more than likely factor into any one person’s potential for developing disease when exposed to a chemical such as PFOA.

In addition to being used in cookware, PFOA has been used in all types of waterproof, breathable fabrics and membranes. Despite the hundreds of recreational and industrial uses of PFOA, DuPont no longer produces it because of its biopersistence and toxicity.

A second chemical compound with properties similar to PFOA used in the production of fluoropolymers is perfluorooctyl sulfonate (PFOS). This compound was also found to be widespread in blood samples throughout the general U.S. population. In the 1990s, this raised concerns about both its biopersistence and its toxicity. As a result, 3M, the primary manufacturer of PFOS, stopped producing this chemical.

Many of these types of chemicals have been phased out since 2006, but some companies continue to produce them and use them in their products. Take a moment to think about this. These toxic, biopersistent chemicals were leaching into our foods for just about fifty years before we discovered they were harmful to our health and phased them out! To me, that’s mind- boggling. So, if you look around your kitchen and see that you have old Teflon pans, what should you do with them? My suggestion would be to toss them out and buy something else, particularly if the surface of your pan is scratched or worn in any way.

In terms of health risks and non stick pans: Are you aware that if you overheat a nonstick pan, you’ll release chemicals from its coating into the air? Back in the 1970s it was discovered that pet birds could die if they breathed in these toxic chemicals. In people, inhaling these gases can cause a chemical pneumonitis (pneumonia) with flu-like symptoms. This is a potential short-term toxic effect from using a nonstick pan. The long-term toxic effects are very difficult to isolate, given that we are exposed to so many different toxins and contaminants in our environment on a regular basis. As there are plenty of alternative materials to cook with, I avoid using this type of cookware.