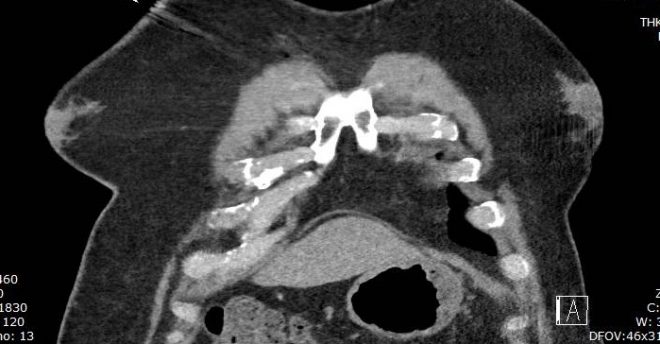 I don’t often get to discuss gynecomastia — more commonly known as “man boobs” with a stranger.

After an arduous workout, I entered the small, hot, wood paneled room which was more crowded than usual. It was one of the only times I had been in the sauna without hearing the whining of music coming through earbuds. Guys were actually conversing with each other.

The banter was initially over sports and exercise routines. But then, the discussion turned to experiences of aging and gaining weight. The men were different races and ranged in age from the mid 20s to the late 50s.

“Man, that started happenin to me at 40!” another added.

My eyes were closed when I heard a crackle followed by a long wheeze. I opened my eyes and noticed that almost everyone in that room had a plastic water bottle. Wow! I thought… good for hydration, but drinking water from hot plastic?

One younger guy sitting next to me told the group how he had gained 50 pounds in the last year after he had started to work out. He was chunky, but not obese. By his side sat an oversized, purple opaque plastic water bottle with a ribbed plastic straw.

“You got man-boobs to boot!” One guy teased, laughing.

Should I say something? I had some ideas about how to lose man boobs. But I held back.

In this pack, I didn’t feel comfortable playing teacher.

I left the room and took a shower, feeling as if I had missed an opportunity to help a few people.

What are Man Boobs?

Many people think that “man-boobs” are merely excess fat. In other words, that when a man gains weight, he deposits fat in his breast. That’s not actually correct.

Man-boobs do contain fat, but they also contain breast tissue, a condition medically referred to as gynecomastia. As a radiologist, I see men with breast tissue all the time. CT scans clearly show this condition because they allow a view through the body separating out structures of differing density. Breast tissue is denser than fat.

Twenty-five years ago, gynecomastia was something I saw once in awhile, perhaps 2 or 3 times a week. It was a condition often seen in patients with alcohol related liver disease. Now, I see gynecomastia throughout the day, everyday. It is common in children as well as in middle aged and older men.

Why is this happening?

Breast tissue develops in response to estrogen. It’s not normal for a man to produce excess estrogen — or for them to be wondering how to lose man boobs, a question that’s become more and more common in recent years. So where is this coming from?

Have you heard of estrogen mimicking compounds? These chemicals are in our plastics, synthetic fragrances, food additives, and personal care products. The scientific literature is replete with articles describing the estrogenic effects of many of these compounds. Yet, there are almost no articles calling out these chemicals as causing diseases associated with excessive estrogen, among them, gynecomastia in men and breast cancer. We know plastics contain these compounds. We also know that these chemicals leach into the food and water held within plastic containers. We know that plastic water and soda bottles are, and have been, a source of long term exposure to these chemicals for many of us, perhaps for decades.

Excess estrogen can lead to many health concerns, including breast cancer, endometrial cancer, cervical cancer, obesity, and gynecomastia. Are estrogen mimicking chemicals responsible for the dramatic increase in the incidence of breast cancer, now affecting 1 in 8 women during their lifetime in the US?! One recent article showed an association of PCB 138 with breast cancer and called for further environmental epidemiological analysis to assess the association of other chemicals such as phthalates, BPA and other PCBs with the development of cancer.

Even though it hasn’t been proved yet, it makes sense to me that these chemicals can cause noticeable hormonal effects on our bodies, and yes, may cause cancer.

So when you read about estrogen mimicking chemicals within a product that you are going to eat from, drink from, put on, or inhale, take that information seriously. Assume these chemicals ARE affecting your health and the health of your family. Although these chemicals are pretty much ubiquitous in our environment, it is possible to consciously decrease your exposure to them. Limit the frequency you drink from plastic bottles. Read up on your personal care products and try to eliminate those that contain these contaminants. A review of these product lists in the environmental working group (EWG) website is a great place to do some research.

Back in the Locker Room

After showering and getting dressed, I saw the younger guy with gynecomastia and struck up a conversation.

“I don’t mean to neb into your personal business, but I overheard you say that you gained a lot of weight this past year.”

I then told him about the chemicals in his plastic water bottle and suggested that he get a glass bottle or a stainless steel bottle instead. I could see a light turn on in his eye and he said… “You know, that makes a lot of sense.”

I told him that I didn’t think it was necessarily going to be a cure for his weight gain, but it would be a step in the right direction.

He was appreciative and I went home feeling helpful.

See also: 5G: A Few Things You Should Know to Protect Your Health