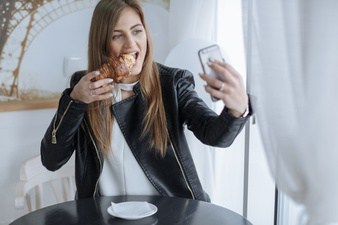 Does Cellphone Distraction Cause Food to Stick in your Throat?

Mealtime is often teeming with device distraction and I suspect digestion can be affected.

Personal devices have completely consumed the attention of many during mealtime. While dining at a restaurant in the historic district of Rome, I recently witnessed a couple sit across from each other, both firmly grasping their personal devices. They couldn’t have spoken 10 words to each other during the entire meal. Each blindly reached for the table, grabbed a forkful of food, and mechanically fed themselves, while their vision remained focused on their respective screens.

At first, I felt badly for this couple. They were oblivious to the ambiance. Their was no apparent personal connection with each other. I can’t imagine they were able to enjoy the taste and aroma of the delicious food they ordered. While focused on the little screens, their conscious awareness was brought into a reality apart from that which their physical bodies were experiencing.

Much of what occurs in the human body is run on automatic pilot, through the autonomic nervous system. But, there are some bodily processes that require some degree of conscious thought. Eating is one of them.

Daily, people show up in my radiology department for a swallowing evaluation. Often, these patients are much younger than they should be. Their common complaint is that food gets “stuck” while they are eating. Then, while motioning to their neck,  they say, “around here.” A common fear, is a blockage, a hidden cancer, which is almost never the case.

During my examination, I am able to see that food isn’t sticking, but rather “mishandled” by the esophagus, the muscular tube which delivers food from the mouth to the stomach. The technical term for this is called dysmotility. This tube relies on the coordinated effort between different groups of muscles and nerves in the upper chest, to propel the food properly. If this coordination is awry, some food gets left behind, typically in the upper esophagus. Eventually, gravity will allow the food to fall to the stomach. Drinking liquids can help bring it down a little faster.

As we age, this discoordination becomes common. But, could it be that by not paying attention to our meal while eating, that muscles are losing their coordination in younger people? I think this is quite possible. If you suffer from this type of condition, turn off the TV and put away your devices while you. Relax and pay attention to what you are eating. Visualize the food being pushed to your stomach with ease. Master it, like any other activity at which you excel. It may take a few weeks to normalize, but I suspect your swallowing problems will turn around.

If the sensation of food sticking doesn’t resolve after becoming conscious while you eat, take a trip to to your doctor to investigate this problem further. Particularly, if you currently or have previously experienced reflux symptoms, such as heartburn, in the past. Although less common, there are other causes for food sticking which can be caused by obstruction, which may need to be diagnosed and treated.

How to Avoid Catching Cold During Climate Change

Balance and Learn to Trust the Rocks