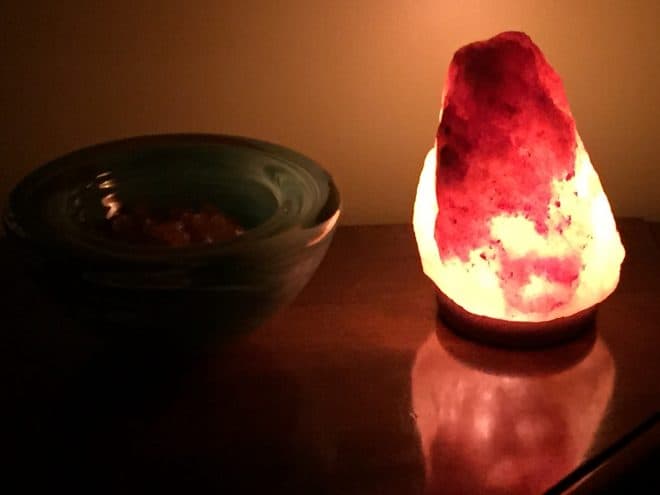 Grace and her husband, JB, are both wonderful friends and accomplished physicians. Their home is reminiscent of a rejuvenation spa with a relaxing, health conscious atmosphere. Attention is paid to every detail. From organic food and air purifiers on each floor to house plants, essential oil bathroom sprays, and organic soaps, I always leave their home with new ideas for my own. During my most recent stay with them, I gained a new appreciation for the benefits of Himalayan salt lamps.

My first morning, I awoke before the sunrise. I navigated the dark bedroom carefully and as I opened the door, I became subtly bathed in a warm, inviting reddish glow. On a hall tabletop sat a Himalayan salt lamp. I hadn’t noticed the crystal the day before. At 5 am, though, this lamp created a memorable and favorable impression. It created a tranquil light especially appreciated at this early hour. Bleary eyed, the light filled me with joy.

I purchased a salt lamp many years ago and placed it in my office. During stressful days, I plug in the lamp to help me stay calm amidst the chaos at work. When the lamp is turned on, coworkers will occasionally enter my office and comment on how calm and welcoming the room feels. Whether the effect be a real physical reaction to negative ions or a placebo effect doesn’t concern me. The lamp helps me relax.

Salt lamps are typically carved from a solid block of salt and hollowed out to make room for a light source. Some manufacturers create lamps with a scalloped recess suitable for a tea light while others contain a small bulb and attached electrical cord. The lamps are attractive in their own right, creating an earthy table top sculpture. When illuminated, they emanate a reddish glow. The reddish glow is a perfect color of light for a hallway or bathroom night light because it has much less of an inhibitory effect on melatonin production than would bluish colored light.

Salt lamps have also been attributed to be a source of negative ion production. Although this claim has not yet been verified in scientific literature, the relaxation effect created by the lamp is similar to that serenity experienced with other locales known to be associated with a greater concentration of negative ions.

What are Negative Ions?

Atoms, the building blocks of our world, commonly become charged. The acquisition of a charge turns the atom into an ion. A charge allows ions to form bonds with each other. Negative ions, referred to as anions, are attracted to and form chemical bonds with positively charged ions, also known as cations, forming molecules.

Ions are a ubiquitous component of the natural world. Moving water is a known source of negative ions. Plants undergoing photosynthesis are another common source of negative ions. Most people are familiar with the sense of relaxation associated with a walk through the forest, a trip to the beach, or by sitting next to a running stream or waterfall. In a typical home, the only sources of negative ions are houseplants and running water filling a sink, bath or shower.

Research has shown that negative ions promote relaxation and improve mood. In the 1980s, several papers were generated discussing a reversible phenomenon known as “serotonin irritation syndrome” in which anxiety worsened when people were exposed to positively charge ions. This effect however was reduced with exposure to an increased concentration of negative ions. Serotonin, a neurotransmitter within both the brain and body, is associated with many functions, including mood regulation and is thought to be affected from exposure to charged ions.

Some who suffer with asthma have reported a sense of improved breathing and a decrease in asthmatic exacerbations when exposed to negative ions, perhaps by a possible cleansing effect on the air. This effect, however, has not been proven.

I’ve appreciated the benefits of Himalayan salt lamps for years. Regardless of scientific validation, I have found these light sources to induce a sense of calm and relaxation. Although I have been using a salt lamp at stressful times during the work day for years, I have gained a new appreciation for them, now as a hallway night light!

Learn more about how to optimize your immune system.