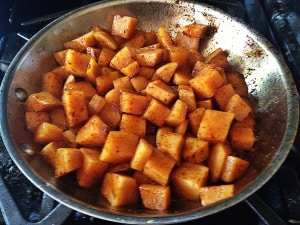 Was it an act of defiance? Once again, I requested extra crispy home fries. This time though, I was secretly mired in conflict. I love my potatoes burnt to a crisp. But, after reading a recent scientific paper about the cancer causing effects of fried potatoes, I’m gearing up for yet another change in my diet.

To quickly summarize, the hazards of adding nitrates to food dates back to a Norwegian Mink farm in the 1950s, when animals began to suddenly die from liver disease and cancer after being fed a new diet of fish meal preserved with nitrites. It was soon discovered that the nitrites were being converted in the animal’s stomach to nitrosamines, sickening and killing the animals.

Both nitrates and nitrites are naturally present in many grains, fruits, and vegetables including celery, leafy greens and potatoes. Nitrates are converted to nitrites in the body. Nitrites are then chemically converted into either beneficial or harmful compounds. When nitrates are ingested in vegetables alone, they are usually turned into healthy nitric oxide which can have beneficial cardiovascular effects. But, when nitrates are combined with degrading proteins in the presence of high heat (cooking) or a strong acid (digestion), they form nitrosamines.

Because nitrites/nitrates prevent bacterial growth, have a mild salty flavor and redden meat, food producers apply synthetic and natural occurring nitrates to chemically preserve meats and other foods. Your skillet, grill or broiler can become a perfect crucible for the production of nitrosamines when you cook hotdogs, bacon or sausage. To address this problem, manufacturers have significantly decreased the amount of nitrates they use and they add Vitamin C to processed meats, which inhibits nitrosamine formation.

Gratefully, the incidence of colon carcinoma is going down in this country. This is in part related to screening exams, but also likely due to the decreased concentration of nitrates added to processed meats. As of October 2015 though, colorectal carcinoma was still the 3rd most common form of cancer death in the US, so perhaps more changes are needed.

According to recent research by Qajarbeygi et al, it turns out that deep frying or pan frying potatoes produces nitrosamines too. Although the researchers didn’t test foil wrapped potatoes cooked on hot charcoals, I think this too would cause nitrosamine production.

It was previously believed that the potato skin contained all the nitrates so if you peeled the potato, you would remove them. But the potatoes were peeled in this study. Potatoes contain vitamin C, but apparently not enough to prevent nitrosamine formation.

What can you do?

1. Reduce your intake of processed meats and look for labels that specify no nitrates added. Even then, check the ingredient panel for celery juice or celery salt. Celery is a source of nitrates and the chemical effect is the same.

3. Boil or bake your potatoes and sadly say goodbye to crispy home fries.

What You Eat… Becomes You

Eat to Nourish, Not to Kill